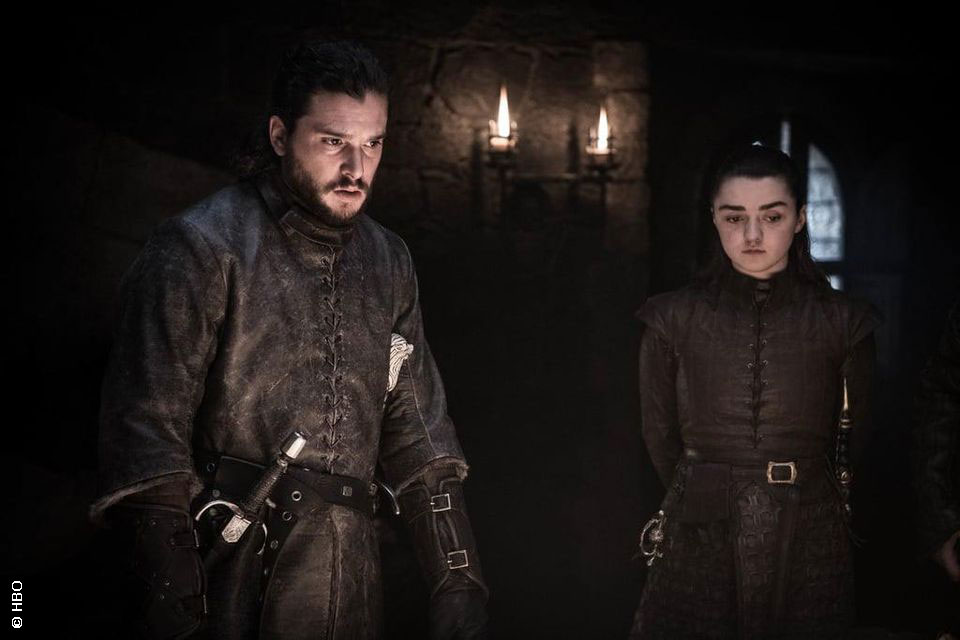 Lord of Light! Come to us in our darkness. We offer you a recap of last night’s episode of  Game of Thrones. Read it and cast your light upon us in the comments section. But beware, for the night is dark and full of SPOILERS.
So Daenerys’ (Emilia Clarke) reaction to finding out Jon Snow (Kit Harington) is her nephew wasn’t “EWWW!!!!”?
What kind of universe is this. All she cared about was his claim to the Iron Throne.
Alrighty then.
This week’s episode took place entirely at Winterfell. It begins with Jaime Lannister (Nikolaj Coster-Waldau) being scrutinized by Dany, Sansa (Sophie Turner) and Jon. They all have a reason to distrust Jaime.
Thankfully, Brienne of Tarth (Gwendoline Christie) vouches for Jaime. Later on in the episode, Jaime uses his powers as a knight to bestow knighthood upon Brienne. You’d have to be a White Walker not to feel anything watching that scene. Speaking of not having feelings…
Bran (Isaac Hempstead Wright) isn’t mad at Jaime, but he also doesn’t forgive him. Bran isn’t really Bran anymore, he’s the Three-Eyed Raven. It’s explained at a war council meeting that Bran will be used to lure the Night King during the Battle of Winterfell.
The Night King hates the Three-Eyed Raven because the Night King wants death to rule the world. Since death eliminates all memories, and the Three-Eyed Raven is a repository of human memory, it makes sense why the Night King hates Bran so much.
This episode had other touching moments. Arya (Maisie Williams) has sex with Gendry (Joe Dempsie). Arya may very well love Gendry, but that’s not why they did it. Arya simply wants to “know what it’s like” before she dies.
THANK YOU. For so many years we have shamed women for their sexual desires. As a result, we’ve had to use narrative devices like “true love” as plausible deniability for female characters wanting to have sex.
All Arya ever wanted was to be treated like a person, and not like a “Lady,” and I’m so happy this show didn’t sully that by making her lose her virginity in a “love scene” instead of a sex scene.
Speaking of love, Dany confesses to Sansa that her love for Jon is what brought her North. And then the conversation turns dark. Sansa wants the North to be liberated, while Dany wants the North to remain as part of the Seven Kingdoms once the war is won.
I find it touching that once the war is won Greyworm (Jacob Anderson) wants to take Missandei (Nathalie Emmanuel) back to her home to see the beaches again. It’s so moving because both Greyworm and Missandei have spent their lives as slaves. The idea of these two contemplating independence is actually a novelty to them.
Samwell Tarly (John Bradley) gives his family’s Valyrian steel sword to Jorah Mormont (Iain Glen). He does this to commemorate the late Night’s Watch Lord Commander Jeor Mormont (James Cosmo), the man who made Sam the man he is today.
Theon (Alfie Allen) returned to Winterfell. He’d rather face certain death defending the castle he once ruthlessly seized than hide in the Iron Islands with his sister. When Sansa sees Theon pledging to die for Winterfell, she tears up and hugs Theon.
Later Sansa is shown spending what she believes are her final hours alive with Theon, sharing a warm meal together.
Podrick (Daniel Portman) sings a touching song set to the melody of what I believe is the end credits theme for most episodes. The song continues as we cut to how other characters are spending their final hours.
I think Sam and Gilly (Hannah Murray) sleeping with their child between them is the epitome of what this show is all about. Under all of the confusing names and places and plot points, this show is about humanity: the good and the bad.
The fact that this show has exposed us to the real ugliness of humanity has only made the viewers cherish humanity’s capacity for good that much more.
I’ll end with this.
Sandor (Rory McCann) clearly wanted to tell Arya he loved her, but he never got the chance to. I think the writers have a tragic death in store for him.
I also suspect we’ll see Meera Reed (Ellie Kendrick) return from the Neck to help Bran. It’s just in her nature.
Whatever happens, I’ll always be grateful for this episode. Tyrion (Peter Dinklage), Podrick, Jaime, Brienne, Davos (Liam Cunningham) and Tormund (Kristofer Hivju) gathering around a fire, with so much more implied than said, is the physical embodiment of what this show is about.
For all the talk of dragons, zombies and battles, this is what this show is all about: people finding love (in all forms) in the darkest of circumstances.
I know we live in a crazy time in which it seems like everyone is addicted to anger. Maybe that’s why Game of Thrones is so popular. But we must remember what we are. We are humans, and we love.
The White Walkers do not love, and it is for that reason that I predict they will fall in the coming episodes.
What will happen next? The remaining humans will abandon their love and kill each other for the Iron Throne.
For you see, love can only truly reveal itself in the face of external threats. Human beings can only put aside their differences to fight their common enemies. Once they’re defeated, humans go right back to becoming savage.
Don’t believe me? Just keep watching. ~Yanis Khamsi