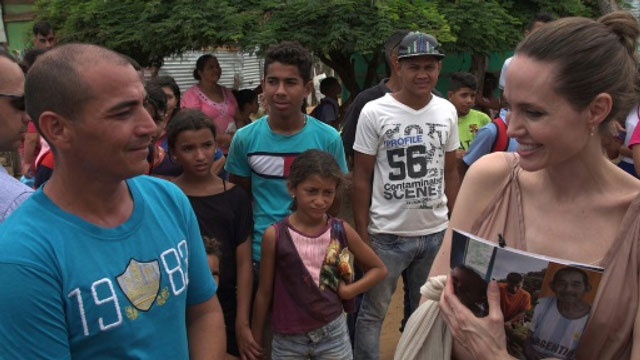 In a meeting in the port city of Cartagena, the American actress urged Duque to resolve the legal limbo facing the children since Colombia does not automatically recognize children born in its territory as nationals.

“The president and I spoke of the risk of statelessness for more than 20,000 Venezuelan children,” Jolie said.

Duque, who has supported the international pressure campaign against Venezuelan President Nicolas Maduro, also stressed the urgent need to resolve the children’s status.

Since Caracas and Bogota broke off diplomatic relations, parents find it difficult to register their children in Venezuelan consulates.

Many of the parents are in irregular situations, leaving the children’s status even more unclear, although they do enjoy basic care.

Addressing their status would be “a humanitarian way of giving them opportunities and benefits,” Duque said.

Jolie, after visiting a border area, praised Colombia’s treatment of the Venezuelan migrants, the biggest migratory influx in Colombian history.

She said she had visited badly overcrowded schools and hospitals but had also seen “the inspiring humanity” of local communities.

The Venezuelan crisis – pitting Maduro against opposition leader Juan Guaido, who is recognized by some 50 nations as the country’s interim leader — has left Venezuelans facing dire shortages of food, medicine and other basics.

An estimated 3.3 million Venezuelans have fled to other countries. Colombia alone has taken in 1.3 million.

Jolie was accompanied on her two-day trip by UN Deputy High Commissioner for Refugees Kelly Clements; they are to visit the border department of La Guajira before returning home.