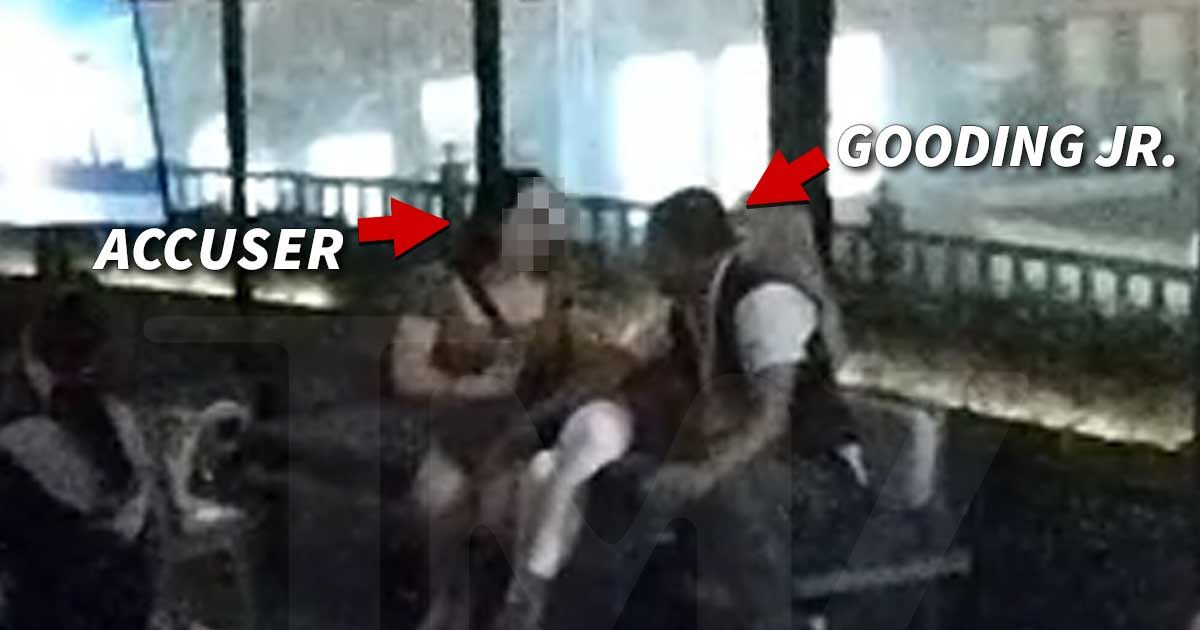 Hand on Accuser in Surveillance Video from Bar

Cuba Gooding Jr. definitely touched the thigh and breast of the woman accusing him of groping — it’s clear in this surveillance video obtained by TMZ — but his attorneys seem to be interpreting the video much differently from police.
Around 10:15 PM on Sunday, Gooding and his GF, Claudine De Niro, were sitting on a couch in the Magic Hour Rooftop Lounge in NYC … when the accuser sat down next to them. Almost immediately you see Gooding reach over Claudine and place his hand on the woman’s left thigh.
A few seconds later his hand moves up to her breast, and the accuser puts her hand on his. What happens next is open to interpretation — she either pushes his hand back toward him, or he pulls her hand to his mouth and kisses it.
Another man then walks over and stands in front of the group. He puts his hands on the shoulders of Gooding and the accuser, leans over and appears to be talking to the entire group.
Things get a little weird then … as the man gyrates, drawing attention to his crotch. It appears Gooding and his GF playfully paw at his crotch. The guy also takes a drink away from Gooding. A few more people join the group, and everyone’s casually chatting for a few more minutes. They all walk away — separately but in the same direction — about 3 minutes after the initial touching. There’s no argument.

However, about 30 minutes later … Cuba and Claudine were downstairs lounging on a couch and making out. A man, who we’re told works security for the bar, was standing next to the couch when the accuser approached him and started arguing.
We’ve blurred her face to protect her identity, but she appears to say, “Yes, he did.” She repeated that after the security guard shook his head. It’s unclear if Cuba heard their conversation, but he got up, stumbled and then walked right past the accuser and left.
Claudine and the security guard followed right behind him.

As we reported, Gooding was arrested Thursday and booked for misdemeanor forcible touching and sexual abuse in the third degree. His attorney, Mark Heller, told us Wednesday he saw “no criminality” on Cuba’s part in the video … something he repeated after the arrest.
We called Heller about this post, but he declined to comment.

Cuba himself spoke on Tuesday in L.A. and told us he believed the surveillance video would show “what really happened, and that’s the most important thing.”