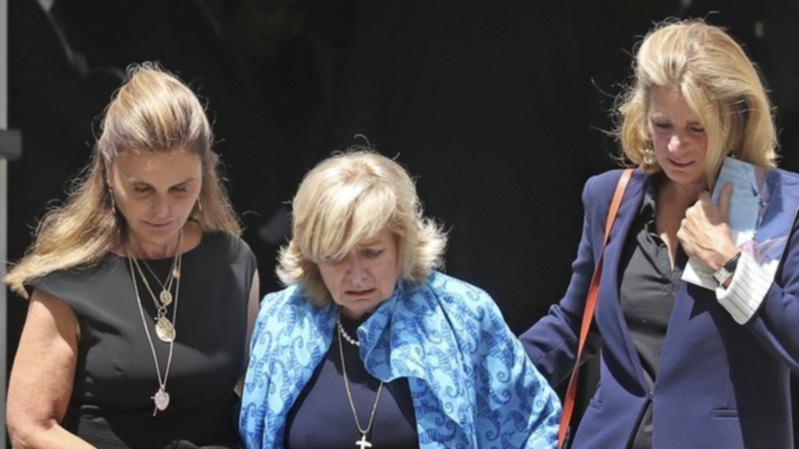 Dozens of members of the extended Kennedy clan as well as friends from college filled a Cape Cod church to pay their final respects to Saoirse Kennedy Hill, the 22-year-old granddaughter of Robert F Kennedy.Ted Kennedy Jr, former Congressman Joe Kennedy Jr, and current US Rep Joe Kennedy III served as pallbearers during the funeral Mass held at Our Lady of Victory Church in the Barnstable village of Centerville, not far from the Kennedy compound in Hyannis Port.Her grandmother, 91-year-old Ethel Kennedy, was also at the funeral.A private burial was scheduled to follow the Mass.Kennedy Hill, who was scheduled to start her senior year at Boston College in autumn, was found unresponsive at a home in the compound on Thursday by first responders who were dispatched for reports of an overdose.She was pronounced dead at Cape Cod Hospital, according to the Cape and Islands district attorney’s office, which is investigating.The cause of death remains under investigation. An autopsy revealed no signs of trauma, and investigators are awaiting toxicology reports.Kennedy Hill was the daughter of Robert and Ethel Kennedy’s fifth child, Courtney, and Paul Michael Hill.The Mass was closed to the media, but according to the bulletin, it included words to a song called When Saoirse’s Eyes Are Smiling, to be sung at the conclusion of the service, to the tune of When Irish Eyes Are Smiling.The Kennedy family in a statement released by a spokesman last week remembered Kennedy Hill for her social activism, her passion about human rights and women’s empowerment and her work with indigenous communities to build schools in Mexico.Kennedy Hill had also written publicly in 2016 about her struggles with mental health and a suicide attempt while in high school at Deerfield Academy.Robert F Kennedy Jr said in an Instagram post said that he thought of her as a daughter.”Saoirse was fierce, both in her love for her family and yearning for justice,” he wrote.”A fearless adventurer, she inspired curiosity and daring in her friends. But her greatest gift was to find humour in everything and to give us all the gift of her laughter – and our own.”Lifeline 13 11 14beyondblue 1300 22 4636