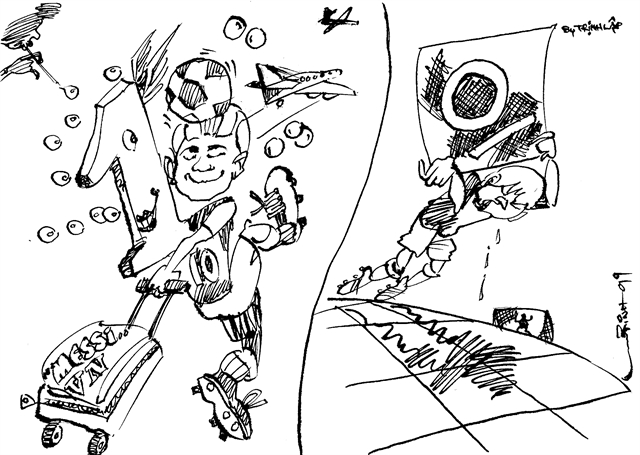 If English were their first language, Barcelona fans would no doubt sing “There’s only one Lionel Messi!” each and every week at Camp Nou.

Although in the little Argentinean’s case, the often sarcastic chant is true, as there’s not another footballer like him on the planet.

That’s why when I see Nguyễn Công Phượng being referred to as the ‘Vietnamese Messi’ I have a chuckle, and then start to feel a bit sorry for the lad.

Talk about high expectations, which bring with them a tonne of pressure for the Nghệ An Province-born forward.

The hype and media attention around Công Phượng have been immense ever since he burst into Vietnamese public consciousness about five years ago. He was by far the top Vietnamese social media influencer in June according to analytics website Buzzmetrics and has more than 2 million followers on his Facebook page.

But if history has taught us anything about what happens when young celebrities have their every move offered up for public consumption, it’s that it rarely ends well.

The national team star moved to Belgian side Sint-Truidense VV back in July and the club have reaped the rewards, at least online.

While the only Vietnamese footballer plying his trade in Europe has been restricted to a single substitute appearance in a 6-0 defeat, the club’s social media following has ballooned since the signing.

The number of ‘likes’ on the club’s official Facebook page has more than doubled to upwards of 76,000 and each post the club makes is rapidly consumed and commented upon by Vietnamese fans, while the Instagram following has also swelled.

The club’s communications officer even told Vietnam Television that 50 Vietnamese supporters showed up to cheer their hero on during a friendly match before the season started.

But it hasn’t been all ‘love’ reacts and supportive comments.

After a post went up announcing the Vietnamese player wasn’t in the squad for Sint-Truidense’s clash with Belgian heavyweights Standard Liege on August 11, the club’s page was flooded with angry, abusive and profane comments from Vietnamese users.

While a few keyboard warriors throwing a tantrum isn’t the end of the world, some local supporters have already soured on the striker due to his always rabid and often unreasonable followers.

Several commenters cheered the Vietnamese player’s exclusion, others made jokes disparaging his abilities and some said the side was much more likely to win without him, which they did.

This negative and fickle response is perhaps a harbinger for what the 24-year-old faces should Vietnamese public opinion turn on him.

In an interview with Dutch-language Belgian newspaper Het Belang van Limburg published on Wednesday, the striker gave some insight into the fishbowl he lives in when in Việt Nam.

Công Phượng explained that when he’s home he can’t even go out for a coffee in peace while in Belgium he’s basically anonymous, something he said he enjoyed.

He also displayed a level of humility and maturity his fans often fail to, saying his priority was proving himself at Sint-Truidense and winning the coaching staff’s confidence.

But even if he manages to do just that and carve out a decent career for himself in Europe, will he ever live up to his fan’s expectations?

Certainly not if they want him to achieve even half of what the Argentinean Messi has in his glittering career.

There’s a long history of celebrities being built up, only to be torn back down again by their formerly adoring fans.

Some bounce back, but others are crushed by the cruel world of paparazzi, tabloid newspapers and celebrity gossip blogs.

If Công Phượng is to avoid the traps so many stars have fallen into over the years, the best thing to do might be throw his phone in the nearest canal, stay focused on his football and forget what people are saying about him.

But seeing as that’s unrealistic for millennials, perhaps what he needs is his fans to back off a bit so he can grow as a footballer and a man at his own pace, instead of having to worry about 13 articles being posted online every time he likes an Instagram post.

While there’s no need to feel too sorry for a rich and famous footballer (he told the Belgian newspaper he doesn’t even know how much money he makes from marketing deals), a little restraint would go a long way.

And who knows, perhaps he might have a chance to live up to his ‘Vietnamese Messi’ nickname. — VNS