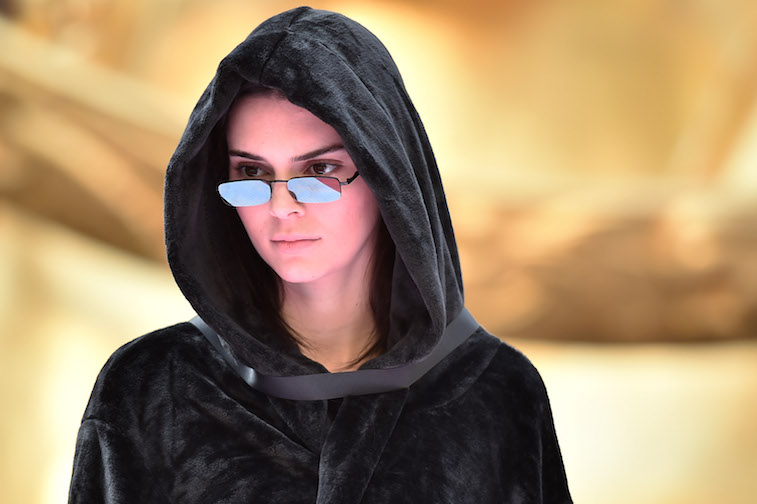 The Kardashian-Jenner family rule the headlines, so whenever any member of their family does literally anything, it makes the media crazy with conspiracy theories. Let’s face it, when there’s drama, it sells. So unfortunately, sometimes stories come out with very little evidence just to get attention.
It’s happened again recently with a claim that Kendall Jenner has cut ties with the rest of the Kardashian family. Let’s take a closer look at this rumor, and see if there’s any truth to the story.

According to Gossip Cop, a recent Life & Style story claims that Jenner is cutting ties with the rest of the Kardashian family. An insider told the magazine that Jenner “wants to focus on her career and her life,” and doesn’t want to be distracted by the constant Kardashian drama.

Every member of the Kardashian family has a busy career, but they always take the time to support each other with their individual projects. Like when Kylie Jenner launched her skincare line.

Not only did the entire family show up to the launch party to celebrate with their sister, but they also made supportive comments on Instagram, expressing how proud they were.

Kylie posted a photo of the family at the party, with the caption, “Family over everything. Don’t know what I’d do without these strong beautiful women in my life.”

The sisters, and mom, Kris Jenner, all responded with plenty of heart emojis and supportive words like, “am proud of you.”

Kris Jenner, the “momager” is always very supportive of all of her children- including Kendall Jenner. Like the time she cheered Jenner on during her runway walk at the Victoria’s Secret Fashion Show. She sat in the front row made sure Jenner felt supported and loved during her big moment. Why would Jenner want to turn her back on a mother who shows so much care?

Although they sometimes bicker on their reality show, there’s always love underneath their words. The Kardashian’s are one of the most close-knit and supportive families out there.

The idea that Jenner needs to cut ties in order to focus on her goals is silly. Every member of the family is dedicated to their career, and they all understand how much it takes to become successful. They wouldn’t get in the way of each other’s success, because like we mentioned before, the Kardashians love to support each other and see every member of their family succeed.

If family drama got in the way of their career, why is every other member of the family enormously successful? The theory doesn’t make sense.

In fact, Kris Jenner is a big reason why the family is such a success. As she told Lenny Letter, every year, the momager sits down with each of her children and asks, “What is your goal for the year?” and she asks what she can do to help them.

In this way, she keeps everyone focused on their goals, and supporting each other.

The only source for the Life & Style article is an unnamed “insider.” Unfortunately, tabloids pull this trick often to make it sound like they have insider information, but in reality, they could be getting the information from anywhere, or nowhere. Whenever it’s written, “a source told us…” or “an insider close to the star revealed…” the information given is unlikely to be reliable.

To find quality information, you need quotes from named sources. And the most reliable source is always going to be a direct quote from the celebrity themselves.

Although, because of the nature of celebrity gossip, not many people are willing to go on the record to talk about their friends. Can you imagine being a celebrity, and opening a magazine only to find out that your best friend told them all about your personal drama? They probably wouldn’t be your best friend for long.

For this reason, almost all sources in celebrity gossip are unnamed, and the reader must use their own discretion to decide what’s real and what’s fake.

In the case of the latest Jenner rumor, there’s too much evidence that contradicts the story to be believable.