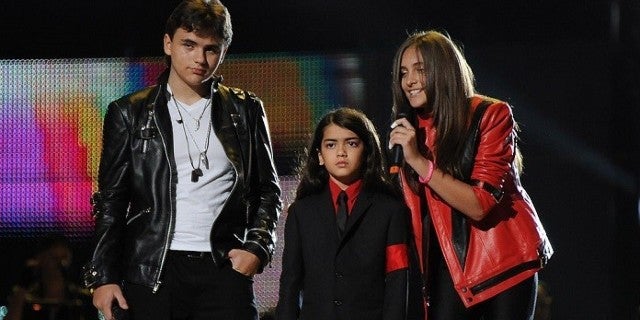 Michael Jackson may be gone, but his legacy live on through his children. The Prince of Pop had three children in his lifetime, and all of them carry on his legacy in different ways. Now, ten years after his passing, many fans are turning to them to see how Jackson will live on.
Michael Jackson is a cultural icon unlike any other, even a decade after his death. The singer went from a child star to a teen heartthrob, then from there into an enigmatic adult performer. He revolutionized pop music, performance dance and celebrity lifestyle itself.
Of course, Jackson had plenty of issues as well. He was infamous for allegations of child sexual abuse over the course of his career, a phenomenon that continues today. There were always questions about the singer’s home, Neverland Ranch, where many claimed he had enticed and then abused underage performers.
This year, questions of Jackson’s alleged abuse were raised again as two of his accusers starred in an HBO documentary called Leaving Neverland. This hit Jackson’s family hard, though they dealt with it in markedly different ways. Some of Jackson’s living brothers and nephews refuted the story, while his children seemed to avoid it as much as possible.
Fans felt much the same. While many were horrified by the allegations in the documentary, others came to Jackson’s defense, saying that there could not be any truth to the stories.Regardless, there is no separating Jackson from American pop culture, and his kids are not leaving the spotlight any time soon. Here is a look at Jackson’s kids over the years.

Slide 1 of 8Michael Joseph ‘Prince’ Jackson Jr. – Then(Photo: Brian Rasic/Getty Images)Jackson’s eldest child is Michael Joseph “Prince” Jackson Jr., born to Jackson’s second wife, Deborah Rowe. He was bron on Feb. 13, 1997, and acquired his nickname early in life. He was infamous for having a dozen nurses in his infancy, and he took to the spotlight from a young age.

Slide 2 of 8Michael Joseph ‘Prince’ Jackson Jr. – Now(Photo: Jason LaVeris/FilmMagic)These days, Michael Jr. has found many places for himself in pop culture media. He sometimes serves as a guest correspondent on Entertainment Tonight, and also appeared in the 2013 reboot of 90210. The 22-year-old is clearly just getting started with his career in show business.

Slide 3 of 8Paris-Michael Jackson Then(Photo: Philip Ramey/Corbis via Getty Images)Fans may be most familiar with Jackson and Rowe’s second child, Paris-Michael Jackson. His only daughter was born on April 3, 1998, and according to a report by Newsweek she was named after the city in which she was conceived.
Paris grew up in her father’s sole custody, as her parents divorced the year after she was born. Paris Jackson attracted attention from a young age, when she would tag along to public events with a mask on.

Slide 4 of 8Paris-Michael Jackson Now(Photo: Getty Images)Paris first burst into the public eye the year after her father’s death, when she and her brother were interviewed by Oprah Winfrey. In the years since, she has taken to social media, were she has picked up a following for her easy-going, hippy-like tendencies. Paris is a passionate singer, though unlike her father she favors a more classic, folk-rock sound.
Paris has also been open about her struggles with mental health, substance abuse and even discussed her suicide attempt in an interview with Rolling Stone. More recently, she has also taken to modeling and acting, with two TV appearances. For better or worse, she is also now a fixture in celebrity gossip publications.

Slide 5 of 8Prince Michael Jackson II – Then(Photo: Michael Hickey/WireImage)Michael Jackson’s youngest child, Prince Michael Jackson II, was born on Feb. 21, 2002. Jackson hired a surrogate to have his last son, and never identified the woman publicly. From the beginning, baby Prince’s life was steeped in controversy, as his father dangled him over a balcony railing for an ill-fated photo op.
With his name so similar to his older brother, Prince Michael II picked up a nickname early in life, going by Blanket. He was cared for by his grandmother, Katherine following the death of his father.

Slide 6 of 8Prince Michael Jackson II Now(Photo: Kurt Krieger/Corbis via Getty Images)There is still little to know about Jackson’s youngest child, as he is still only 17 years old. However, he did publicly reveal in 2017 that he prefers the name Bigi, outgrowing his childhood nickname “Blanket.” According to Newsweek, Bigi Jackson was bullied for years over the name.
Bigi currently attends the Buckley School in Los Angeles, an upscale high school that many celebrity children attend, including both of his older siblings. In 2017, Bigi was adopted by Tito Jackson, as his grandmother became too old to care for him full time.

Slide 7 of 8Jackson and His Children(Photo: Brian Rasic/Getty Images)Behind the scenes, little is known about Jackson and his children as a family unit. It goes without saying that the kids grew up in a media circus, with more scrutiny than young people can be expected to deal with.
Still, it is clear that all of the kids loved their father, and value his massive legacy. The kids have all avoided commenting on the recently resurfaced allegations in Leaving Neverland wherever possible.

Slide 8 of 8Jackson’s Children Grow-Up(Photo: David Livingston / Getty Images)As adults, Jackson’s children remain close in spite of their unconventional family life. In 2017, Prince gave an interview on The Today Show, saying that he and his siblings are as close as ever.
“We get along really well,” he said. “Especially my sister—she’s grown so much, and I think she’s been able to really step up. And I don’t really see myself as her older brother. It’s kind of like we’re equal partners when it comes down to it. And Bigi’s just so mature for his age—it’s a pretty strong bond.”