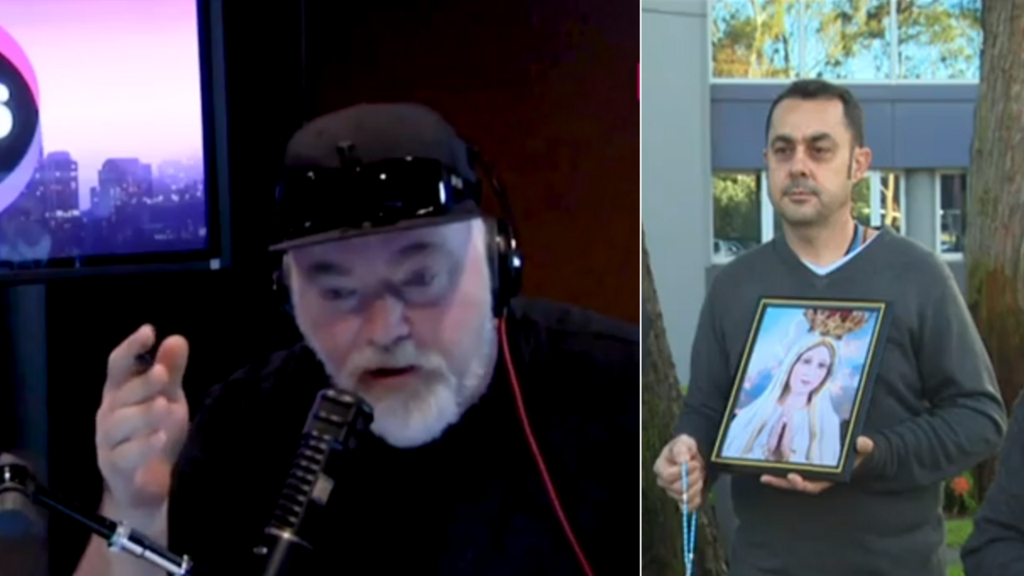 Kyle Sandilands has apologised on air for comments he made mocking the Virgin Mary, saying the remarks were a “hugely bad decision” made in poor taste.The KIIS radio co-host was referring to comments he made in mid-September from the radio station’s Los Angeles’ studio.Watch the video aboveSandilands has been bombarded with calls and threats from listeners – and calls for his sacking – since saying he thought Mary was Jesus’ girlfriend, not his mother.”I thought Mary was his girlfriend but apparently it was the mother,” he said on air.Kyle and Jackie O. Credit: AAP”And the mother lied obviously and told everyone, ‘Nah I got pregnant by a magical ghost’.”He also said the Virgin Mary had been “chock-a-blocked behind the camel shed”.The radio host was subsequently slammed online by religious groups, Muslim and Christian alike, who called for him to be sacked.He apologised last week when he was photographed by paparazzi.Chevron Right Icon’We’ve all made mistakes in our life and this is just one of many that I’ve made.’But on Monday, he took to the airwaves to issue a full apology on air.”I believe everyone has their own right to their own opinion, their own religious belief and no one has the right to take that away from them,” he said.”But what I didn’t release until I started taking these calls was that I’d stepped on the belief of other people, and that’s what I’d done wrong.”‘Am I sorry? Absolutely’He said the comments had been a joke but a “hugely bad decision” made in “poor taste”.”I didn’t realise the gravity of it,” he said.”I know in reflection what I said was dumb, and I’m the dumb one for saying it.”No other person has the right to make us feel less for believing whatever we believe in.More on 7NEWS.com.au”Am I going to quit? No. Am I going to get fired? No. Am I sorry? Absolutely.”We’ve all made mistakes in our life and this is just one of many that I’ve made.”Co-host Jackie O also said she had received plenty of messages and issued her own apology.”It’s never our intention on this show to hurt people. That really upsets me that those people have been hurt,” she said.