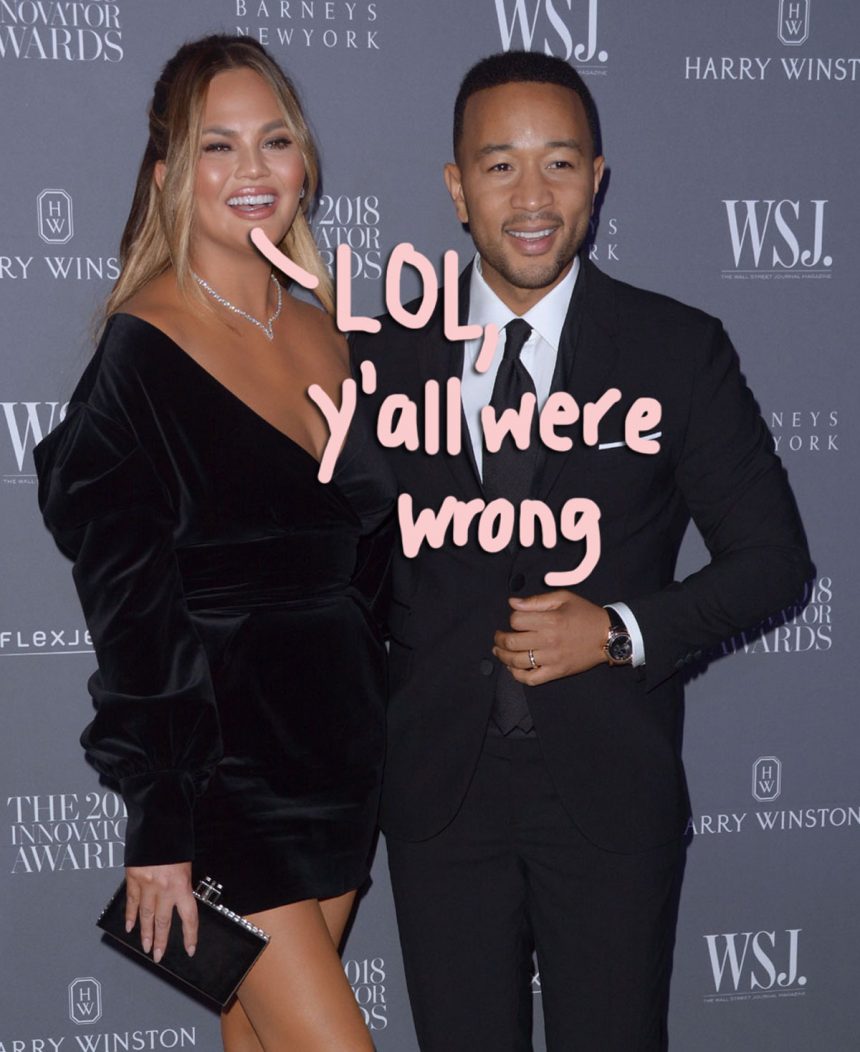 Chrissy Teigen and John Legend continue their streak as one of our favorite candid celebrity couples of all time.In their new cover story for Vanity Fair, the couple, who’s been married since 2013, opened up about everything from politics, to their relationship with Kim Kardashian West and Kanye West, to the early days of their love story — including public perceptions of Legend before he got together with his model wife!Related: Chrissy Teigen Blasted Over Forearm Tattoo With ‘Really Strong Holocaust Vibes’ After recalling how the two met in 2007 on the music video set of John’s single Stereo, the 33-year-old supermodel admitted she used to scour gossip blogs for intel on her future husband because at the time, he had a very unique reputation.“He was kind of known at the time for either being in the closet or a modelizer. I used to go on the websites and it was always either how I was his beard, or how he paid his past serious girlfriends, or how he was with some new model. Oh my god, I would read everything.”Chiming in and noting how their relationship moved “pretty quickly” from there, John added:“It got serious pretty quickly. She just entertained the hell out of me, texting me. What people respond to in her tweets today was the same energy in those texts. I didn’t know that I wanted someone funny until I was actually with someone funny.”Awww! We’re glad those rumors weren’t true after all! LOLz.In addition to that funny story, check out more highlights we’ve rounded up from their extensive joint cover story (below)!The Cover ShotsThis was truly a family fair! See the pair and their beautiful family together here:With John looking dashing on his own, too:And Chrissy’s stunning shot (below):Chrissy’s Life Before Meeting JohnBefore she was a cookbook author, mother-of-two, and the queen of social media clap backs, the former Sports Illustrated star recalls working as a struggling model in Miami for many years when she and John first started dating.Describing the period of her life financed by little and cheap dinners at McDonald’s, she said:“I had no credit cards, I didn’t have a bank account, and it just didn’t occur to me to ask my dad for money. I knew exactly how much it was with tax to get a McDouble and fries.”The Bring The Funny star admitted Legend used to wire her money from time to time, too. It sounds like the All Of Me singer was looking out for his lady from day one!!On Their 2020 Election PickIt’s pretty safe to say these two won’t be throwing their support behind Donald Trump for his presidential re-election bid for 2020. Instead, the couple shared they are big fans of Democratic primary candidate hopeful, Elizabeth Warren. Legend admitted:“My favorite—I’m going to say it, we’ll break news today—is Elizabeth Warren. She’s the best candidate running today and she comes at it with joy and with sincerity and with a wealth of knowledge and experience.”Teigen supported her husband’s sentiment while mentioning another female candidate she loves (below):“I love Elizabeth Warren. I also love Kamala Harris.”On Their Relationship With The WestsThere was a time when the couple was much closer to Kim and Kanye. Chrissy and KKW’s friendship goes way back to the days when they’d go on double dates when reality TV starlet was linked to Reggie Bush. John and Ye have been industry pals since their musical relationship began back in 2007. In over a decade since then, both pairs and their respective families grew closer, spending everything from Easter to their kids’ birthday parties together.However, these days they’re not exactly best buddies! Speaking on his current status with Mr. West, Legend said:“I’m not trying to disown Kanye because I still love him and love everything we’ve done together creatively. But we were never the closest of friends.”Yikes!The power couples hit a snag in their friendship after Yeezy began publicly supporting the POTUS with wild rants on Twitter last year.The EGOT winner continued, telling VF about how their political differences eventually forged a wedge between them (below):“I think what was always challenging about it was Kanye has never been political. I don’t think he knows one way or another what policies of Trump’s he likes. He just kind of embraced Trump’s blow-it-all-up spirit and the energy of himself being countercultural in supporting him.”Additionally, the Lip Sync Battle host and her husband also shared their thoughts on Kim K meeting with Trump on behalf of prison reform and inmates seeking clemency. Legend candidly quipped:“It’s a cheap win for [Trump]. But the people being granted clemency are real people with families. So even if the clemency is won through his celebrity-whore tendencies, it’s still helpful for that family and that person. At the same time, he’s locking kids in cages and he’s a terrible human being….”Chrissy, for her part, said she couldn’t muster up the same energy the KUWTK star did to meet with Trump:“To be able to go in there and put whatever you hate about him aside to do this greater good for this person? I don’t know if I could physically muster that smile and handshake.”John’s Upcoming Christmas Duet & Chrissy’s Plans For The FutureThe recording artist revealed he is releasing a set of holiday songs this year as a follow-up to his 2018 album, A Legendary Christmas. One record is an updated version of the classic Baby, It’s Cold Outside featuring his fellow The Voice coach Kelly Clarkson. The star promised his version would omit the original’s problematic lyrics and take a socially conscious approach with lyrics like, “It’s your body, and your choice” that celebrate consent.Sweet!As for Teigen, she told the magazine of her plans to launch a new website for fans of her cookbooks. Her dream down the road, besides a third baby, is to cohost a nighttime variety show one day with her husband.There you have it, Perezcious readers! Thoughts on this extensive interview? Anything surprise you?Tell us how you feel in the comments section (below)![Image via WENN]