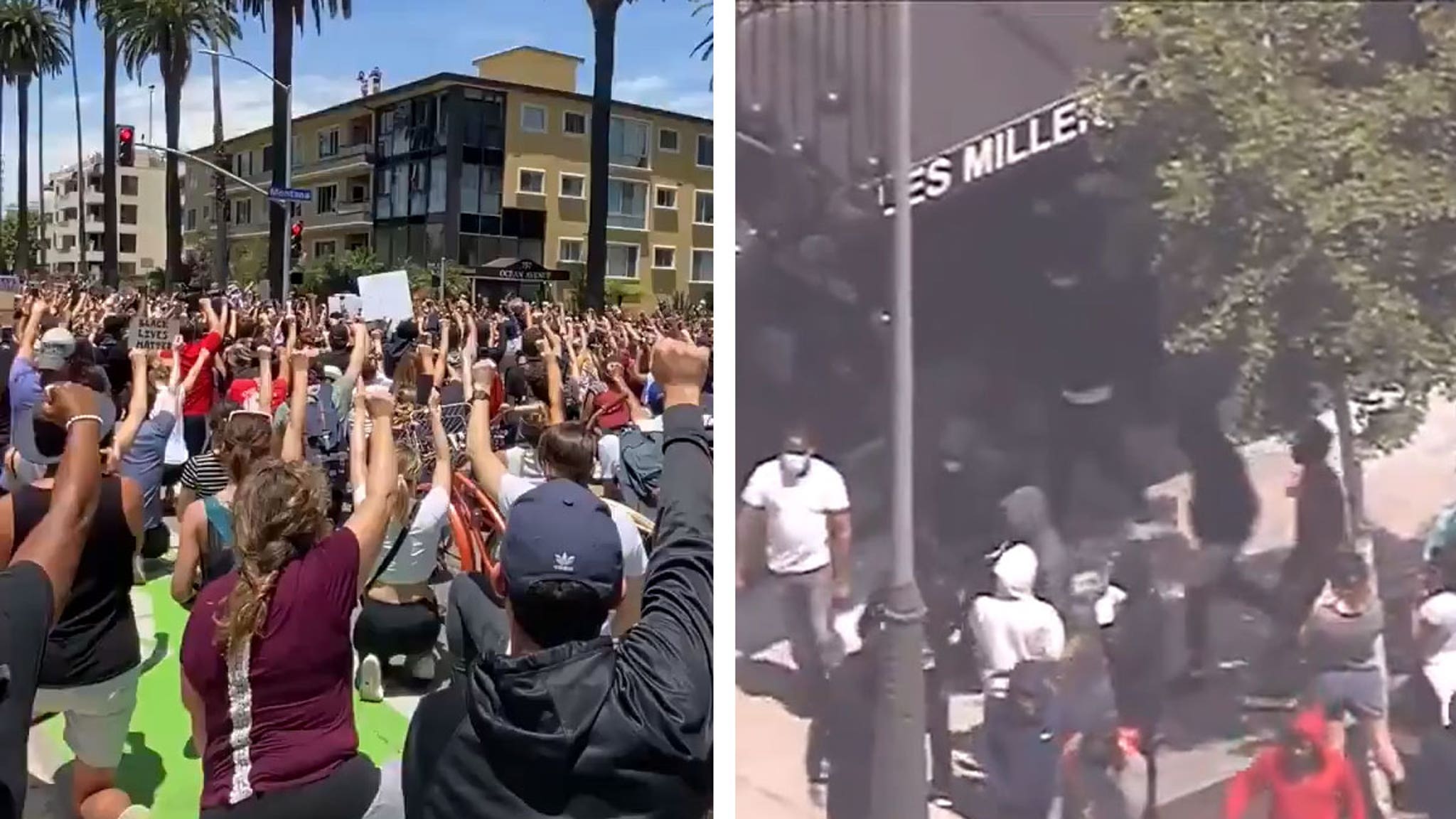 5:38 PM PT — L.A. County has announced a 6 PM curfew on Sunday night to all cities that fall within its jurisdiction.
What started out as a peaceful protest in Santa Monica has descended into complete and utter chaos as well as rampant looting — a progression we’ve seen day in and day out.
People began to gather in SM early Sunday afternoon, with many marching while holding signs and carrying out chants — basically, going about their demonstration with relative calm. They’d taken up the streets, but were also getting supportive honks from drivers.

Hundreds of demonstrators quietly taking a knee for 2:53 seconds in the middle of the streeet pic.twitter.com/gcIN3MzenZ— Brianna Sacks (@bri_sacks) May 31, 2020
@bri_sacks

Folks even took a knee in silence at one point for nearly 3 minutes, asking cops that eventually arrived to join them and do the same. No violence through the first hour, it seems.
Unfortunately, as the day went on … things took a turn for the worst as people began to face off with officers, and eventually broke out into full-on looting and rioting.

Tons of stores — some of which are in Santa Monica Place — started getting raided and ransacked within just a couple hours … places like the Vans store, the Nike store, CVS, Shoe Palace, Louis Vuitton, Joe’s Jeans, Bloomingdales and even an optometrist clinic!!!

One store, REI, was being guarded by a peaceful protester who attempted to stand in the way of the entrance door — and was physically accosted by people trying to break in. FOX 11 captured some of the craziness she had to endure to protect the camping door retailer.

People literally tried physically removing her from her spot, yanking her away and even throwing fireworks at her to shoo her off. The lady didn’t budge though … she kept coming back.

Luckily, a guy finally came and joined her in trying to ward off would-be looters — so, it’s clear not everyone is out there trying to break into businesses and take what they can.
The situation in Santa Monica has gotten so tense, the city has now announced a 4 PM curfew … well before nightfall. Unclear how effective it’s going to be without the enforcement of cops on the ground — things seem to be getting out of hand there quickly.

Just ask the driver of this Amazon van — which was also getting looted at one point in the day. Bad apples have taken matters into their hands and turned it into an ugly narrative. Tear gas is now being deployed, and the clashes are ramping up … like a vicious cycle.
Truly, a shame.
Originally Published — 3:30 PM PT